Otillie Audrey Lieberknecht. What a mouthful. Her New Jersey birth certificate said "Otille Lieb," born on September 20, 1908, in Jersey City to Wm. C Lieb, 39, and Florence Wenzel, 25. They lived at 243 Montgomery St. She was the second child and the only one living. I suspect the first child was named Dorothy as Momma Audrey said I was named after her sister. Audrey was the 2nd or 3rd female child of William's, the first two, John and Olive, were with Mary A. Carter, his first wife. William's mother was named Ottilie. There's a little discrepancy here with his supposed first child, Ollie, who was born five months before the marriage, and the DNA doesn't match with William's sister's (Agnes) line and mine.

William liked to be called Lieb, and that is what Florence called him. Lieberknecht was his step-father's name, and William used that most of his life having grown up with George Lieberknecht as his father since he was seven years old. But that's another story when I write about William.I don't think Audrey liked the name Otillie. She was known as Ottilie Lieb in grammar school in Oxnard and at Santa Barbara High School. She changed her name to Audrey Otillie around the time she married Philip Grosvenor Jones in 1930 in Ventura. From then on she signed Audrey O. Jones in her books and watercolor paintings.Sometime soon after Audrey's birth in 1908, the family left for Detroit, Michigan where they appear in the 1910 US Census. From there they traveled to Santa Barbara where Aunt Barbara was born on September 9, 1911. Barbara's birth certificate says "unnamed," and her parents were Wm. C. Lieb, 42 and Florence Wenzel, 27. They were living at the Anapamu House. Years later in 1971, my sister Phyllis and Barbara filed an affidavit to amend the birth record to show Barbara's name as Barbara Rosemarie Lieb Tuttle to enable Barbara to apply for Social Security benefits.  The family must have traveled quickly to Santa Barbara from either Detroit or El Paso, Texas in order for Florence (we called her Mimi) to give birth to Barbara in 1911, and then they traveled back to El Paso, Texas. This is where it gets confusing. Here's where a timeline helps:1908 - Jersey City, New Jersey1910 - Detroit, Michigan1911 - Santa Barbara, California1912 - El Paso, Texas
1920 - Oxnard and Santa Barbara
Audrey may have been a sickly child. I heard once she had rheumatic or scarlet fever. The Oxnard Courier reported her as having pneumonia. Audrey had complained that she never got to go anywhere with her parents because she was often sick.sickly childrheumatic fever?high grades in Oxnard schoolShe rode on the train from El Paso to Oxnard alone as reported in the Oxnard Courier.
Plays that Audrey was in:
Officer 666, Apron Strings
at the Playbox Theater 1408 State St.,
Playbox Players1939
By Dorothy at March 18, 2022 No comments:
Email ThisBlogThis!Share to TwitterShare to FacebookShare to Pinterest

He isn't missing any longer, but his history is compelling enough to relate to my family. My mother's mother, Florence, called him Lieb as did his friends and associates. Sometimes he used Lieb or was referred to as Lieb in city directories and US Censuses.

From the beginning:
1869:  My grandfather, William, was christened in Philadelphia, Pennsylvania at the Salem Zion United Church of Christ on June 26, 1869. His christening name was Wilhelm Carl Jacob Dickhaut. William thought he had been born in Trenton, New Jersey, but in 2017, I discovered the baptismal record from the church in Philadelphia. His parents were Karl Dickhaut and Auguste Wilhelmine Ottilie Reinecke. The sponsors were Jacob and Johanna Oesterle, the same Jacob Oesterle who was the witness to the marriage of William's parents in the same church in 1867. 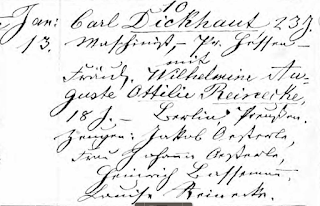 1870:  William and his parents were listed in the 1870 US Census of Winslow Township, Camden County, New Jersey. This township is right across the river from Philadelphia, Pennsylvania. They are listed as
Charles Dickhout 26, laborer,  Germany; and
Oteliee Dickhout 22, wife, Germany; and
William Dickhaut, 1, New Jersey. 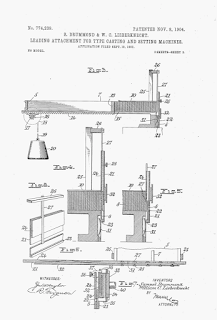 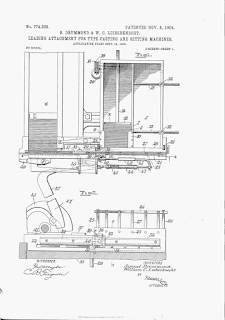 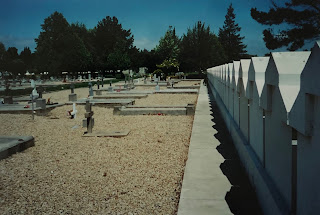 It's really William's father, Karl Kaspar Dickhaut, who is missing.

Annie was missing from the 1910 US Census, but her daughter, Florence Wenzel, had traveled from Jersey City, New Jersey with husband (?) William and daughter, Ottilie, to Detroit, Michigan and appear in the Detroit Census for 1910. Could Annie be close behind or even ahead?

And then there's this other so-called event of Annie's that would have happened before 1917, and that may have been another marriage. On her marriage application to Thomas W. Adams, her name appears as Sarah Crawford. That Crawford name comes out of the blue! The application (the information was most likely given by Thomas Adams) shows them both living in Los Angeles.

Since Florence and William were in El Paso, Texas at some time between 1910 and 1918, with daughters Ottilie and Barbara, could Annie have been there too? Barbara was born in Santa Barbara, California in 1911. Figure that one out. There was a lot of moving around between Texas and California. Maybe Annie followed them. How and where did she meet Thomas Adams? Tom was a photographer and had a photo studio in Oxnard while Annie ran a boarding or apartment house in Oxnard.
By Dorothy at January 17, 2020 No comments:
Email ThisBlogThis!Share to TwitterShare to FacebookShare to Pinterest

Annie Sarah Taylor is Missing Again (from the 1910 US Census). She’s in the 1920 and 1900 US Census, but not 1910.
After she divorced Peter Wenzel about 1892, they were living apart in the 1900 US New York Census in Poughkeepsie; Annie was listed as a widow, a seamstress, with four children: Florence 18, Helen 12, Carrie 10 and George 2. In the same Census, Peter Wenzel is a widower, a boarder and is a stableman. Note that George was born in 1898, 6 years after Annie's divorce from Peter. Hmmm.
In the 1910 US New York Census, Peter is living as a renter with his son, George 12, and his sister Adelaide. In the 1915 NY State Census Peter and George 18 are living in Hyde Park. Peter is a florist and George is a laborer. Where is Annie Taylor Wenzel?
By Dorothy at January 18, 2019 No comments:
Email ThisBlogThis!Share to TwitterShare to FacebookShare to Pinterest

Finally, I am posting the original marriage license and marriage certificate for Annie and T. W. Adams.
It brings to mind more questions and thoughts. This is why it's so good to review documents after a while. They seem to simmer and come to light, occasionally that is. Probably not this time, though. Let's analyze it.

1. All of the handwriting is in the same hand, presumably the minister who conducted the ceremony, or the clerk at the county. The minister's wife was the only witness. Even the signatures that state,"We the groom and the bride named in this certificate, hereby certify that the information given therein is correct, to the best of our knowledge and belief," are written in the same hand.

2. So maybe this certificate is not an original, and that someone has copied from the original in order to file it in this book, page 259.  Now, this makes more sense, except that the information written or given is questionable. I wonder how I could obtain the original from Los Angeles County. I'd like to see Annie's handwriting. Her mother, Helen Walker Taylor Traver, signed her name with an X on her testimony at Annie's divorce from Peter Wenzel in Poughkeepsie, New York.

3. Her first marriage was to Peter Wenzel. She stated that her marriage to Adams is her 2nd marriage and that she was a widow, but she is using "Crawford" as her present name. It was customary for a divorced woman to say she was a widow even though her previous husband was still living. Peter Wenzel didn't die until 1935. Who was the Crawford she said had died? Or was she hiding from Peter Wenzel?

This is all very mysterious. But she is still my missing ancestor until I find where she died and was buried. 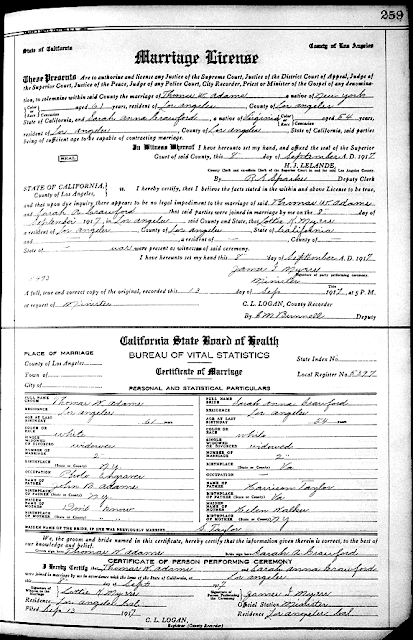 By Dorothy at June 27, 2018 No comments:
Email ThisBlogThis!Share to TwitterShare to FacebookShare to Pinterest

In April 2016 I again flew to SLC to see what I could find of my Missing Ancestor, Karl Dickhaut. I did locate a baptismal record for the elusive Karl Dickhaut in Germany with the help of a library volunteer. I'm not certain this is the right Karl Dickhaut. Karl would be my gr-grandfather, the father of William Carl Jacob Dickhaut aka Lieberknecht. (my maternal grandfather), Hermann and Agnes.

William thought he was born in New Jersey, and perhaps he was, but in 2017, I discovered a baptismal record in a church record in Philadelphia.  The parents were Karl Dickhaut and Auguste Wilhelmine Ottilie Reinecke. And then I found a marriage record for Karl Kaspar Dickhaut and Wilhelmine Auguste  Ottilie Reinecke in Philadelphia at the same church, Salem Zion United Church of Christ.  The witness was the same man who was also the sponsor at William's baptism, Jacob Oesterle.  Here's the timeline for Karl & Ottilie:

1874 Philadelphia City Directory. I'll put that info here when I find it.

After 1875, I cannot find Karl Dickhaut.  However, in 1877, I did find Witness/Sponsor Jacob Oesterle in an Omaha, Nebraska City Directory with Mrs. Carl Shultz at the same address.
By 1878 Ottilie Schultz has married George Lieberknecht in Omaha, Nebraska. The 1880 US census for Omaha shows George Lieberknecht with a family of Ottilie, wife, William, Hermann, and Agnes as children. There is also Jacob and Johanna Oesterle living in Omaha in 1880 Census.

Truly a mystery of whatever happened to Karl Dickhaut and how Ottilie acquired the surname Shultz/Schultz.

My DNA results reveal close cousin matches to a Dickhart and a Deckhart, but of course, there are no trees for either matched cousin.

More about Jacob Oesterle: In a US Passport Application #20930 dated 11 April 1873, he states his birth date as 18 May 1834 in Koenigsbach, Baden and that he is a US Naturalized citizen. A Hamburg Passenger List shows him departing Hamburg on the ship Cimbria on 10 September 1873 for a New York port. His occupation is listed as a metzger (pork butcher).  1880 Omaha Census he is listed with Johanna. A death record index for Philadelphia, Pennsylvania 1803-1915 at Ancestry.com has him listed as born about 1834, died 21 June 1898 in Philadelphia, PA, age 64.

By Dorothy at March 13, 2018 No comments:
Email ThisBlogThis!Share to TwitterShare to FacebookShare to Pinterest

I've been thinking about the reasons Annie would have used Crawford on her marriage license.  Some reasons may have been:

1.  She was married to Mr. Crawford between the time of her divorce from Peter around 1896 (she had a child, George, with Peter in 1898) and 1910 when she is not found in the 1910 NY Census in Poughkeepsie. What happened to Mr. Crawford? Annie is not in Detroit, Michigan where her daughter Flora is with William Lieberknecht in 1910.

2.  She was hiding from Peter Wenzel.  I doubt he would have had the funds to travel to California, and how would he have found out she was married again?

If anyone has any suggestions about these reasons or have some other possible explanations, please do make some comments.

I still haven't found the death and burial places for Annie and Thomas W. Adams, or any concrete evidence that Thomas W. Adams is the Thomas Winfield Adams born in Texas, the one I thought was in Long Beach with a deceased wife, Lizzie, who died in 1909.

By Dorothy at April 05, 2016 No comments:
Email ThisBlogThis!Share to TwitterShare to FacebookShare to Pinterest
Older Posts Home
Subscribe to: Posts (Atom)

Dorothy
I've been researching my family history since 1986 while living on our sailboat in Vero Beach, Florida.